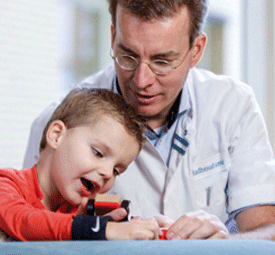 Michel Willemsen, MD, PhD and his colleagues at Radboud University in the Netherlands have begun an “open-label” clinical trial of nicotinamide riboside in children and young adults with ataxia telangiectasia (A-T). With financial support from the A-T Children’s Project, Dr. Willemsen’s team is currently enrolling 32 individuals with A-T in the Netherlands in a four-month clinical study to test the dietary supplement, brand named Niagen®, which is a form of vitamin B3.

Several researchers have previously reported that vitamin B3 metabolism is abnormal in cell and small animal models of A-T, while others have found that treating those models with nicotinamide riboside corrects some of the abnormalities associated with A-T. There have also been a handful of case reports in which families and physicians have believed that their A-T children had more energy and muscle control when taking nicotinamide riboside.

The current trial is intended to be exploratory, looking for clinical effects and changes in laboratory markers, but recognizing that it will not be a placebo-controlled, blinded study. If nicotinamide riboside appears to change certain blood parameters, motor performance tasks, speech patterns or overall quality of life for patients with A-T, the A-T Children’s Project will then consider supporting a more formal, placebo-controlled, double-blinded, cross-over trial of this product in a larger number of patients to obtain a definitive, conclusive evaluation of nicotinamide riboside’s efficacy in A-T.