A-T is inherited, or passed on, in families just as many of our physical and chemical characteristics are passed along from parents to children. Examples of these characteristics include eye color, hair color and the chemicals that determine blood type. The messages that determine these, and the thousands of other characteristics making an individual unique, are called genes. The genes are packaged on long, string-like structures called chromosomes. Every cell in the body contains all the chromosomes, and with them all of the genes, necessary for life.

Each of our cells contains 23 pairs of chromosomes, and therefore 23 sets of gene pairs. One of each pair of chromosomes is inherited from our mother, while the other is inherited from our father. Since genes are on these chromosomes, we also inherit one gene for a certain characteristic (such as eye color) from our mother and one gene for the same characteristic from our father. During egg and sperm production, the 23 pairs of chromosomes (46 total) are divided in half. One chromosome of each pair, and only one, is packaged in each egg or sperm. When fertilization of the egg occurs, the 23 chromosomes contained in the egg combine with the 23 chromosomes in the sperm to restore the total number to 46. In this way, each parent contributes half of his genetic information to each offspring.

A-T is an autosomal recessive disorder. This means that the disease can only occur if two abnormal genes (one from each parent) are present in the patient. If an individual inherits only one gene for A-T, then he is a carrier but does not have A-T. No one is responsible for these abnormal genes. In fact, each of us has abnormalities (mutations) on many different genes that could cause disease if present in a double dose. Fortunately, in most cases, we have a normal copy of the gene on its matching chromosome, and one normal gene is enough to prevent disease. At this time, it is unclear if A-T carriers have any abnormalities. There are no apparent problems with the brain or the immune system. If there is an increased risk for cancer among carriers, it appears to be a small increase relative to individuals who are not carriers.

In autosomal recessive inheritance, affected brothers and sisters may be found. Males and females are affected with equal frequency. Both parents carry the gene for the disease although they themselves are healthy. The figure illustrates how this kind of inheritance operates in A-T. 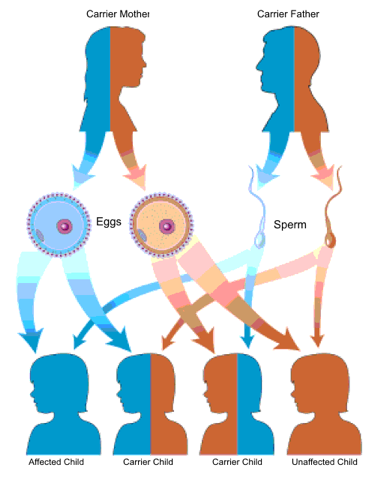 Carrier parents can have three different types of children with respect to A-T. When an egg or sperm is produced, one or the other copy of each chromosome is picked in a random fashion to be packaged. Thus, the mother can produce two kinds of eggs – one containing the A-T gene and one containing the normal gene.

Similarly, the father can produce two kinds of sperm – one kind containing the chromosome carrying the A-T gene and the other containing the normal gene.

If an egg containing the A-T gene combines with a sperm containing a normal chromosome then a carrier child results; one normal copy of the gene is enough to prevent the symptoms of A-T.

Similarly, if an egg containing the normal gene combines with a sperm containing the chromosome carrying the A-T gene, a carrier child is also produced.

The chances for a given egg to combine with a given sperm are completely random. According to the laws of probability, the chance for any pregnancy of carrier parents to result in each of the following outcomes is as follows:

After a child with A-T is diagnosed, many families are faced with a difficult choice about future pregnancies. The risk of another child being affected is 25 percent. These chances seem unfavorable to many families, particularly when combined with the lack of specific treatments for A-T. These decisions are personal, although important information can be gained from speaking to the physicians caring for your child. In most families with a child who has A-T, some form of prenatal genetic testing is possible early in an at-risk pregnancy. If an affected fetus is identified during the first or early second trimester, the couple can then decide whether they wish to continue the pregnancy.

There are alternatives to this process. Some couples at risk for recessive disorders elect to use donor sperm through a process call artificial insemination. By using sperm from someone unrelated to the father of the affected offspring, the risk is reduced substantially as the donor is unlikely to be a carrier for the same problem.

Some couples may choose to adopt a child, as they do not wish to attempt another pregnancy themselves. Although this process can be frustrating and lengthy, many couples are successful in locating a baby or child to join their family.

Finally, the option of maintaining the current family size may seem best to some couples. Either because the possibility of having another similarly affected child is unacceptable or because the demands of the current family are high, expansion of the family may not be desired. Careful consideration of these options is important before decisions can be reached. In addition, periodic consultation with the medical staff can be helpful in keeping current with recent medical advances that could potentially provide more information for your family.

The question frequently arises as to whether family members, such as aunts, uncles, cousins and siblings, should be tested to determine whether or not they are carriers. This is a very complex question and it would require an extensive discussion to elaborate all of the personal issues that should be considered. Since we do not have effective prevention or intervention strategies for the potential breast cancer risk, it is not clear how much benefit arises from knowing that someone is an A-T carrier. This is especially true since the breast cancer screening recommendations at this time are not much different for A-T carriers compared to the general population.

A second reason that some individuals desire to know whether they are A-T carriers is because they wish to avoid marrying another A-T carrier and having a child with A-T. The risk of a healthy sibling being a carrier is 2 in 3; the risk of an aunt or uncle being a carrier is 1 in 2. The chance of marrying another A-T carrier is approximately 1 in 200, and the chance that two carriers will have a child with A-T is 1 in 4. Thus, the chance of a sibling or aunt/uncle of an A-T patient marrying an A-T carrier and having an A-T child is approximately 1 in 1,200. This is a small risk when compared to a 1 percent risk of a severe birth defect in any pregnancy. In addition, though it is not technically difficult to ask whether a relative of an A-T patient is a carrier, it is currently technically very demanding to ask whether someone from the general population is an A-T carrier.

There are also complicated issues beyond the scope of this discussion regarding screening unborn children for A-T. For now, general screening for potential spouses is not offered by any laboratory and, as discussed above, it may not really be a logical plan of action. This may change someday as the A-T field and technology move forward.

Disclaimer: The information provided on this website should NOT be used as a substitute for seeking professional medical diagnosis, treatment or care. You should not rely on any information in these pages to replace consultations with qualified health professionals.