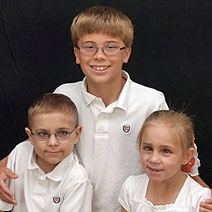 Just shy of his 3rd birthday, Tate was diagnosed with A-T & just a few months later, Tessa, then 18 months, was also diagnosed. The news has forever changed our lives. Since then, we have done everything we can to ensure Tate & Tessa lead fulfilling lives.

We quickly educated ourselves about A-T & have become strong advocates for A-T research.

In July 2009, Tate was diagnosed with Hodgkin’s Lymphoma. Knowing cancer is not uncommon for those with A-T, it was just another fight we had to endure. In April 2010 after much struggle, sickness & sacrifice, Tate was told he was finally in remission. In December 2010, our family received some terrible news again. Our Tate was rediagnosed with cancer. This cancer quickly took over and we lost our beloved Tate on January 3, 2011.

It is our mission to do all we can to ensure Tessa and all other A-T children do not have to go down the same path as Tate! Please consider giving a minimum of $10 a month to this worthy cause. It is an easy way to show your support for Tessa and our family. We greatly appreciate it!

We’re asking you to be part of our Giving Circle by donating $10 or more a month using the donation form below. Your monthly gift will help maintain a constant means of support for research funding. The advancements we have made and are making can be attributed to the families and friends like you who generously support our mission to find life-improving therapies and a cure for A-T. Every dollar raised is a dollar filled with hope.

Our Giving Circle donors will receive: