2011: It was Thanksgiving two years ago when Addison Johnson thought she was suffering from heartburn. It was soon apparent she was in fact going into labor with triplets. Local hospital officials felt it best that she go to a larger hospital in Pittsburgh. The anxious ambulance driver made the typically hour-long drive in 35 minutes. It was a wild ride. And their ride would only get bumpier, as Addison nearly died in childbirth a week later and the family would find out in seven months that all three triplets would be diagnosed with ataxia-telangiectasia (A-T) like their brother. The Johnsons have four children age 4 and under with A-T.

The Johnsons were expecting a second child when they found out their 2-year-old son had A-T. A-T is a rare genetic disease that causes progressive loss of muscle control, immune system problems, and a very high rate of cancer, usually leukemia or lymphoma.

But when they went for a test to determine if the new baby would have it as well, Addison Johnson said they got a surprise. She and her husband, Ryan, weren’t just having one baby, they were having three.

The test for A-T, not set up for triplets because it would be now considered high risk, was called off. And partly because of complications surrounding the births – Addison went into a coma for two days just hours after delivery and nearly died – they didn’t have the babies- Alivia, Payton and Riley – tested until they were seven months old.

Addison said there was also another reason they waited.

“I wanted to get to know them for who they were before being known as A-T-kids,” she said.

They were told the odds of siblings having A-T were one in four, so Ryan said he was hopeful about the girls’ test results.

The news came back on Aug. 11 of last year, on their third year wedding anniversary. All three girls had A-T like their brother, Ayden.

“Words can’t say how you feel,” Addison said on a recent afternoon while the triplets slept.

She quit her job as a supervisor of a foster care company in January to take care of the children and only recently has gotten help from an aide that comes to the house. Ayden is now 4 years old and the girls turn 2 on Dec. 4. “It is a challenge,” she said.

Ryan is a dock worker for Estes Express Line, a trucking company, and usually works 10 p.m. to 6 a.m.

The Johnsons live in Greensburg, Penn., about 30 miles east of Pittsburgh. Addison is originally from Sioux City, Iowa and it was on a trip there with Ayden when he was 14 months that she realized that there was a problem. She said her mother, aunts and others starting telling her that he was not walking correctly. She said he was walking “like a drunken sailor,” a common description for many A-T children at that age. Their pediatrician suggested they go to a neurologist. After going to Children’s Hospital in Pittsburgh, all tests checked out negative. They were referred to a mitochondria clinic since some members of her extended family have mitochondria disease. which is failure of the mitochondria, specialized compartments in cells other than red blood cells. Staff there recommended Ayden be tested for A-T. The tests took weeks, but when the results were in, she said they were told, “Great news, he doesn’t have it, he’s fine.”

The doctors sent out more blood for testing to see if there were any problems in addition to hypotonia. Adidson and Ryan were told it would be months before they heard anything. And in the meantime, since A-T was ruled out, they bought a bigger house and looked to expand the family. It didn’t take long before they found out Addison was pregnant. She was three months along when they got the news that Ayden did in fact have A-T. They confirmed it soon after with a visit to the A-T Clinical Center at Johns Hopkins Children’s Center.

“I still had a hard time believing it,” Addison said.

She said she spent many hours crying, so much so that Ayden began to ask his father why mommy was so sad. She said she felt it was not fair to him to be so depressed. So following the news of the girls, she said they try not to think or talk too much about it.

“I still look at my kids every day and I think no matter what, I’m still blessed and honored,” she said, adding that there are people who aren’t able to have children. In addition to A-T, Payton was diagnosed earlier this year with cerebral palsy and Addison herself still deals with health issues related to the pregnancy.

She began having contractions with the triplets on Thanksgiving of 2009, but medical staff managed to hold off delivery for a week. The triplets were not due for another two months. And they later learned that Addison had undiagnosed preeclampsia, a pregnancy condition that can cause high blood pressure.

As she gave birth to Riley, the third to be delivered, she began having trouble breathing. Ryan said he was taking pictures of the babies and he became aware that the nurse was calling his wife’s name.

“She was slapping her in the face and she wouldn’t answer,’’ he said.

He began to go to his wife, but a nurse ordered someone to get him out of the room.

He paced the hallway and called family members while he waited to see if they could revive his wife. About six or seven long minutes later, doctors came and got him and said that his wife was OK and that he could see her. A doctor said amniotic fluid might have caused her heart to flutter. She was talking and appeared better, but kept complaining of being cold. When they couldn’t get her warm and her fingertips began to turn purple, she was taken to the Intensive Care Unit. She suffered a pulmonary embolism, which is a blood clot in the lung, and was put into a medically-induced coma.

“They said they didn’t have much hope for what was happening,” she said. “He was definitely beside himself.”

At that moment, he had a 2-year-old boy with A-T, three triplet girls born prematurely (one weighed 2 lbs 5 ounces) and his wife, and their mother, might be dying.

“That was probably one of my worst days – two, three days of my life,” Ryan said. “It was pretty scary.”

He said he went back and forth between his wife and the babies. When he was with the babies, he said he would wonder if they would ever be held by their mother.

Though he considers himself spiritual, Ryan did not belong to a church, but he called on his wife’s pastor and wife, and asked for their prayers.

Addison pulled through and was told what had happened. By Monday, she was back to a regular hospital room, anxious to see her now 4-day old daughters. Since she was weak, her visits with them were short.

“It was devastating,’’ she said.

She was soon released, though still suffering from congestive heart failure from the clot going to her heart. Being released made seeing her daughters more difficult since she now had to make the hour-long drive back and forth, usually with Ayden in tow. “I always felt like I was neglecting them, like I should have been there,” she said. Eventually, the triplets progressed and were able to go home. Now, nearly two years since Addison went into labor that Thanksgiving, the triplets are doing well and Ayden is a loving big brother to his three toddler sisters. He loves to kiss the raised strawberry mark on sister Peyton’s head. Olivia is taking her first steps, but only if she thinks no one is looking. And Riley is mastering stairs and door handles.

Ayden was IronMan for his Halloween costume while his sisters were peacocks. And the Johnsons have just sold their house and are building a larger one, since the three-bedroom is getting cramped with three cribs in one bedroom and does not have the modifications they may need. The house may not be ready until March, so they may have to live somewhere temporarily until it’s done. 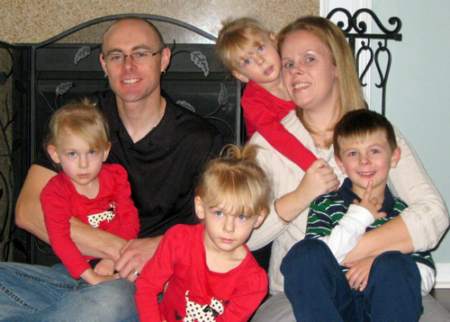 Addison said they go on living their lives, while praying for a miracle. They are working with the A-T Children’s Project to help fund first-rate research and make that miracle happen. Last year, they participated in the Altoona (Iowa) Stinkfoot 5K. It was Ryan’s first race and he came in fourth overall. Addison and her aunt walked and came in last, though her aunt still placed third in her age category. Addison’s mom and other family members held a spaghetti dinner and auction. They raised $4,500 for the A-T Children’s Project. Because A-T is such a rare disease, the A-T Clinical Center and research projects are funded only through the grassroots efforts of families and friends affected by A-T.

Ryan is looking to take on the Hy-Vee Triathlon in Iowa next September to raise more money for A-T research.

“Our hope lies in the research funded by the A-T Children’s Project,” she said.