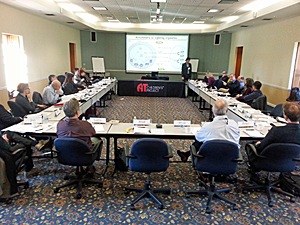 Mitochondria, tiny oval structures found within our cells, are essentially power houses. They produce the energy our cells need to function and survive. And abnormal mitochondrial activity plays a role in many diseases, including several neurological disorders.

Recently, several research teams working on A-T have produced data hinting that mitochondrial activity – including the production of reactive oxygen species (ROS) and oxidative stress – may contribute to the progression of A-T. Because it may be possible to improve mitochondrial function with particular drugs, the A-T Children’s Project quickly organized a workshop to obtain advice from experts who have focused their careers on mitochondria research.

As a result, two weeks ago, 25 world-class scientists came together in Tarrytown, New York for a unique, two-day workshop focused on mitochondria and metabolic signaling in A-T. Gerry Shadel, PhD, from the Yale University School of Medicine, and Mike Kastan, MD, PhD, Director of the Duke Cancer Institute, co-chaired the meeting. Leading experts in mitochondrial biology and A-T from around the world discussed the extent to which abnormal mitochondrial activity, oxidative stress and metabolic signaling contribute to the progression and severity of A-T. Not every workshop attendee was convinced that abnormal mitochondrial activity was directly involved in A-T, but there was strong agreement that abnormal ROS signaling was.

The workshop generated new strategies for investigating mitochondrial and metabolic or ROS dysfunction in A-T and prompted the formation of several new collaborations between research groups. Participants discussed possible treatment options that could shift the altered cellular ROS in A-T patients back to a more normal state, and numerous follow-up steps were planned for coming months.