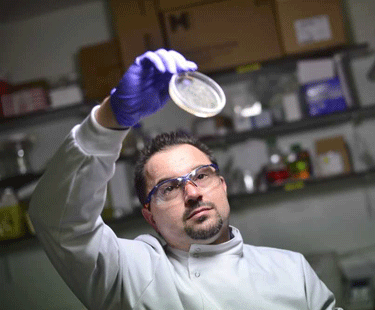 Gene therapy, one of the most promising approaches now being tested on a range of rare and single-gene diseases, relies on using a modified virus to deliver a functioning copy of a gene into the cells of patients.

But the viruses that work best for delivering genes to the brain, called adeno-associated viruses (AAVs), are limited in the size of the gene that can be carried inside them. And unfortunately, the A-T gene is nearly two times larger than the largest gene that an AAV virus can carry. Scientists have tried engineering a smaller version of the A-T gene by removing parts of it, but they’re now convinced that the entire gene needs to be included to restore function.

To overcome this obstacle, the A-T Children’s Project has just funded the laboratory of James Dixon, PhD, from the University of Nottingham in the UK to develop a gene therapy approach for A-T based on nanotechnology that does not require using a virus. If Dr. Dixon’s team succeeds, their “non-viral” delivery system will be able to carry an entire A-T gene and may enable the treatment of all A-T patients, regardless of the type of mutations they carry.

Dr. Dixon’s work will be getting underway in the fourth quarter of this year and we expect to know, in an animal model, if his approach may work for A-T by late 2019.