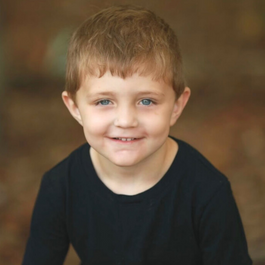 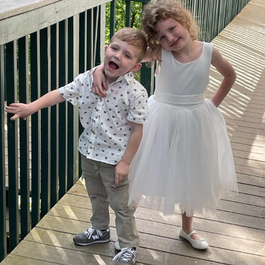 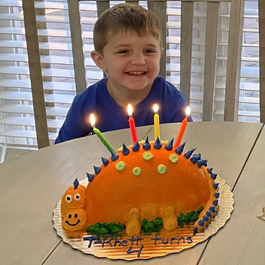 Rhett is 4 and he is the sweetest little human. Our story started when he was around the age of 2. Up until that point he had been growing normally and meeting his milestones. However, we started noticing that he was more “wobbly” and “slobbery” than the other kids his age. He was clumsier on his feet. Some of his exam at times began to mimic Cerebral Palsy but his story didn’t fit. His pediatrician initially set us up with physical therapy and speech therapy for evaluation. We were also seeing ENT and Pulmonary for his recurrent upper respiratory infections. After a few sessions with physical therapy, we knew we needed to see Neurology. Blood work then led to concerns for Muscular Dystrophy. We were all over the diagnosis map and so were our emotions. Labs, labs, more labs, and an MRI later we still had no idea what we were dealing with. Nothing seemed to fit. Frustrated, we then saw a neuromuscular specialist and different Neurologist who immediately sent us to Genetics. “This is not Cerebral Palsy.” “This is not Muscular Dystrophy.” Genetics started with a simple panel of genes to rule out muscle disorders. When those results were inconclusive yet again, we broadened out the genetic panel to examine his full genome. Two years later with this DNA test, we found our defective ATM genes. Our biggest fears have come true that we are dealing with something that has no cure, no treatment, and is progressive. After receiving this heartbreaking diagnosis, I cannot begin to tell you how thankful we are for the A-T Children’s Project. Community is everything and this foundation has set us up with others in the United States and around the world that share our same story. The A-TCP is working vigorously with researchers around the globe to find a cure.

So we are now on mission, and we are racing the clock. Thank YOU for helping us RACE to a cure! Your support is the hope we need and that these kids deserve! Your donations and time WILL make a difference.

WANT TO TALK TO SOMEONE?

We’re available to answer your questions. We love the opportunity to see how we can help!